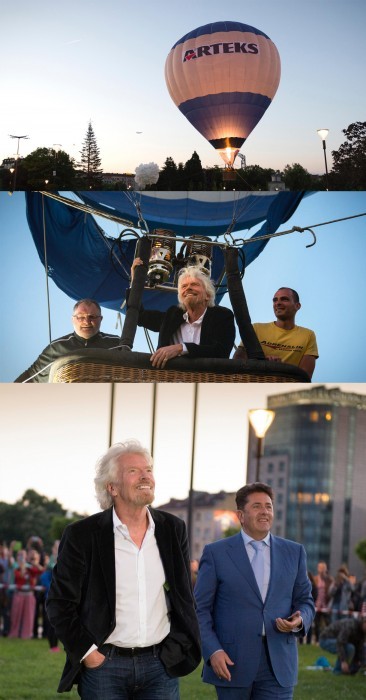 ARTEKS ENGINEERING AD was the general sponsor of the public lecture in Hall 1 of the National Palace of Culture of Sir Richard Branson, the billionaire visioner, the eccentric personality, the businessman with a flight of imagination.

Would Richard Branson be on the hot air balloon of ARTEX ENGINEERING? To the question of the young arch. Plamen Plamenov Miryanov he answers with a ... jump from the stage. Then he crosses the audience and minutes later the balloon rises above the National Palace of Culture.

On May 19, at the National Palace of Culture, everyone present at Richard Branson's presentation encounters with a man who does not miss an adventure does not waste a minute. Some secrets of the successful ones are derived from their overall presence, gestures and spontaneous reactions.

"At ARTEKS ENGINEERING we enthusiastically accepted to be the general sponsor of the meeting, says the CEO of the company, Arch. Vesela Miryanova. We want to participate in the creation of a living platform for business ideas in our country, with a variety of perspectives. The presence of so many young people in the hall once again proved that Richard Branson is one of the most charismatic personalities in the business world. It is the young people who need a living example, provocation, different visions of success. His rebelliousness and this combination of pragmatism and fantasy in projects alters the very thinking of the business. In "Virgin" we also have fun and eccentricity, and the most inspiring for us is the example of a respected and beloved company based on values and offering products that stimulate the industry itself to be closer to the customer and more creative. "Virgin" is a brand of trust. At ARTEX we also believe that the brand is primarily the responsibility of the company and a guarantee for the customer. 8We are pleased to have contributed to the meeting with a person who is gathering so infuriating enthusiasm and foresight."

Sir Richard is not a rule in the business world. Rather, it is an attractive exception: with the audacity not so much to discover unsuspected niches in the market as to try to dethrone the self-satisfied leaders in the sector; With his never-ending adventures by air and water; With the desire to "democratize" the super-luxury - cosmic tourism, for example.His contribution to the theory and practice of success is not in the formulation of iron rules, but in breaking the clichés for the business and the entrepreneur. Branson, business, rebellion - this combination seems most natural.

The man of energy Richard Branson had to come to Bulgaria. The British, but in fact a global businessman, is the clear proof of success in which there are both zigzags and failures, and project termination, but there is never a refusal to search for new roads. Nor is it a drop in energy. It was not a coincidence that he emphasized to the audience not to let go of inertia, to watch for opportunities. It is known that at "Virgin" they look over 50 business deals per week. Only some of them are gold, but no one is looking at the careful analysis of the rest as a waste of time. Vigilance, Perspective Thinking, Fast Response - Alphabet of Business According to "Virgin".

Branson creates a positive image of entrepreneurship, insisting that, first, it addresses the problems in the world. For him, good business means having a unique idea that - and that is more important! - makes people's lives better. "You do not have business," he said to the Sofia audience. " Watch out for the things that annoy you that frustrate you, "was his advice on reaching this happy idea. He has assumed diplomatically that both in Bulgaria and the UK there are gaps that can be filled by entrepreneurs. Throughout the conversation at the National Palace of Culture, the guest did not cheat on the engaging but moderate and friendly tone. There was no sign of the bomber's "business zodiac" that the leaders were wolves, tigers, lions, or sharks. (He is, of course, strongly opposed to the killing of sharks, considering them to be extremely important to the ecosystem and far safer than it is suggested).

The second condition "for Branson" success is the people you work with. Without the skills of interpersonal contacts, the attention and hearing of the other, no one is welcome to "Virgin" as a business partner or manager. "The last person we want in "Virgin" is the one who thinks he can be rude, dishonest, or that he can crush others to get to the top." Without pity" Without calling people "resources," "capital," or "asset," Branson insists that everything in business is related to people, and that each contributes to a happy and successful company. That is, the rudeness to the cleaner is a business gaff.

The other mistakes look calm and does not consider the dismissal a natural consequence of a serious omission, Branson says. (In the room, he sparked an animated response to the "horrible TV broadcast" The Trainee", in which everything revolves around getting fired. Maybe he's going to a white house somewhere in the world.) In his 50-year career" "In his 50-year career, which began at the age of 15, he said," I learned a lot about what I should not do, and a little about how to do some things. " "Being an entrepreneur is a long learning process." It would be curious to count how many times the person who left school at the age of 16 used "learn" at the two-hour meeting.

Richard Branson seems to be a man who adores the limitations because he denies that they are ridiculous, stupid, or that they only existed in the imagination of the horrors. "The heavens are no longer the limit," refute the popular phrase in English [The sky is the limit - the sky is the limit, the ceiling of the possible], giving as an example the absorption of space and the business adventure" It is obvious that he considers the audacity, the crossing of the boundaries inherent to the active person. Not only because they are a matter of adrenaline, that is, the basis of the fun they hold so much, and because they are a matter of civic position. He argues that business should actively intervene in unresolved social issues rather than leave it to the state because it would be useful precisely for entrepreneurial ingenuity and efficiency. And he says he spends 80% of the time on non-profit-related projects.

Virgin Unite is a Virgin company that has been fully committed to publicly beneficial initiatives since 2004, such as promoting entrepreneurship among the underprivileged, protecting minority rights, rethinking strategies to fight drugs, and others. All proceeds from the May 19th meeting in the National Palace of Culture go to the Virgin Unite Fund, which Richard Branson especially thanks for. Despite the insistent invitation, the entrepreneurs who made this visit come to the stage, people from ARTEKS ENGINEERING did not show up for applause. "We are not looking for visibility as individuals, more important is the recognition of our company. We are working with the future and the meeting with such a visionary is an honor and an incentive for us, because we are also VISIERS like him. Honestly, Richard Branson in ARTEKS's hot air balloon - this is already a sight-seeing", says with a smile arch. Vesela Miryanova.

Yes, the meeting with this ambiguous, eccentric and inspirational personality ended with a balloon climb - high above the ground, with soil and space for imaginative business.