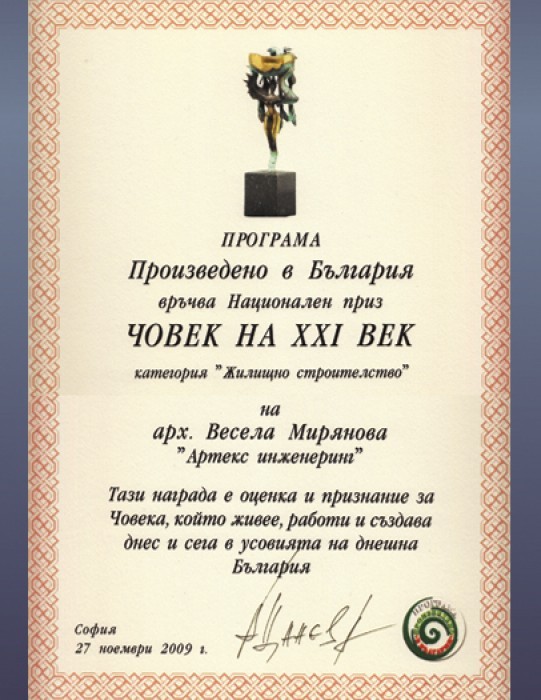 On 27 November 2009, for a ninth consecutive year,“Made in Bulgaria” awards the national prize “Person of the 21stCentury”, which this year was held under the motto “Optimism in times of crisis”. Special guests at the ceremony were the world famous architect Dominique Perrault and Gilberto Casciani, Chairman of the Rome Municipal Council.

ARTEKS ENGINEERINGAD was awarded the prize “Person of the 21st” in the residential construction category. The prize is both an assessment and recognition of the Man who lives, works and creates here and now,in the conditions of modern Bulgaria. Architect Vessela Mirianova, who received the prize on behalf of the company,pointed out: "We have loads of work to complete for our European capital. For instance, when in twenty years’ time we will have to replace the amortized panel-made residential blocks with new modern and beautiful residential buildings and complexes, we, at ARTEKS, must be still here to do it."

The mission of the programme “Made in Bulgaria” is to be a shop window of Bulgarian production and culture, of “all Bulgarian and native” which raises our national self-confidence and makes us a worthy part of Europe.